This is a 2012 review paper and a really good summary on the fate of platinum drugs in model systems and in cells.

While we know that cisplatin completely cures testicular cancer and is very effective in a few other cancer types, the mechanism of action is still not really known. It is also not known why it is so selective against testicular cancer. The article made me really realize how little we know about cisplatin and other platinum anticancer drugs. There are tens of cellular targets and it is still not understood what happens to cisplatin when it enters the cell. In fact, only 1% of cisplatin ends up binding to DNA. There is still so much work to do to answer these questions and develop better drugs. I hope I can help one day. 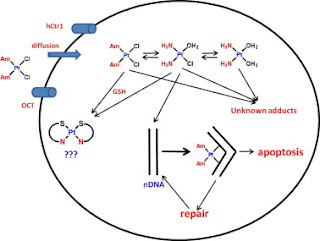 Posted by Chemdiary at 8:52 AM No comments:

The Phenomenon of the Styrian Arsenic Eaters... #chempaperaday 231

This is new to me. So, apparently, it was long known (or believed) to be that there were/are people who eat white arsenic to become immune to certain diseases or to get healthier! Stories of these people were told in several parts of the world including Europe and several novels, poems etc. are based on these people. 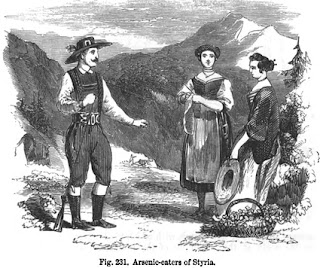 In this interesting article, you can read whether this phenomenon is real or not. The author mentions as many of these literature examples as possible and like a detective, he tries to find the truth. I think it is a really good read if you enjoy history of chemistry.
Posted by Chemdiary at 9:02 AM No comments:

Not the most conclusive study, but a good work on the synthesis and characterization of three trinuclear complexes.

Posted by Chemdiary at 2:29 PM No comments:

There is a nice paragraph summarizing the limitations of the experiments and analysis of these catalysts too such as surface structure-activity reaction.

For those who know nothing about metal nitrides in heterogeneous catalysis, I think the key is that they are believed to show "noble-metal like behaviour."

Posted by Chemdiary at 1:34 PM No comments:

Diiron Azadithiolates as Models for the [FeFe]-Hydrogenase Active Site... #chempaperaday 228

More on diiron complexes in this post. This is a nice and beautifully written summary of Prof. Rauchfuss' work on the topic.

"To the eyes of an organometallic chemist, the active site of the [FeFe]-H2ases combines the familiar and unfamiliar."

- Diiron, nickel-iron and iron based hydrogenases have no evolutionary relationship.

Posted by Chemdiary at 1:23 PM No comments:

Ok, first of all, I am not dead and I didn't stop reading. In fact, I've probably read more than ever. I mostly read papers related to my research and a specific research problem though. That's why I keep them to myself. Hopefully, I will get on track again starting with this post.

This is a really good article on dinitrosyl iron units which are believed to be very important in cell biology. As the authors say "DNICs have been documented to be the largest NO-derived adduct in cells".

You can find some really cool synthetic routes to make these complexes and their electrochemistry in this paper. Hope you enjoy.

Posted by Chemdiary at 1:13 PM No comments: