Book: Regenesis: How Synthetic Biology Will Reinvent Nature and Ourselves

George Church is a great mind and scientist. I had the chance to listen to his talk in Museum of Science last year. So, when I saw the book by him, I didn't even hesitate one second. I knew it would be a great read. After reading it, I can say I was absolutely right. Whether you like biology or not, whether you know some biology or not, you should read the book. It is not only a book about synthetic biology and the future of it, it is also about humanity, the fate of humans and our society.

"Imagine a future in which human beings have become immune to all viruses, in which bacteria can custom-produce everyday items, like a drinking cup, or generate enough electricity to end oil dependency. Building a house would entail no more work than planting a seed in the ground. These scenarios may seem far-fetched, but pioneering geneticist George Church and science writer Ed Regis show that synthetic biology is bringing us ever closer to making such visions a reality. In Regenesis, Church and Regis explore the possibilities—and perils—of the emerging field of synthetic biology. Synthetic biology, in which living organisms are selectively altered by modifying substantial portions of their genomes, allows for the creation of entirely new species of organisms. Until now, nature has been the exclusive arbiter of life, death, and evolution; with synthetic biology, we now have the potential to write our own biological future. Indeed, as Church and Regis show, it even enables us to revisit crucial points in the evolution of life and, through synthetic biological techniques, choose different paths from those nature originally took. Such exploits will involve far more than just microbial tinkering. Full-blown genomic engineering will make possible incredible feats, from resurrecting woolly mammoths and other extinct organisms to creating mirror life forms with a molecular structure the opposite of our own. These technologies—far from the out-of-control nightmare depicted in science fiction—have the power to improve human and animal health, increase our intelligence, enhance our memory, and even extend our life span. A breathtaking look at the potential of this world-changing technology, Regenesis is nothing less than a guide to the future of life." 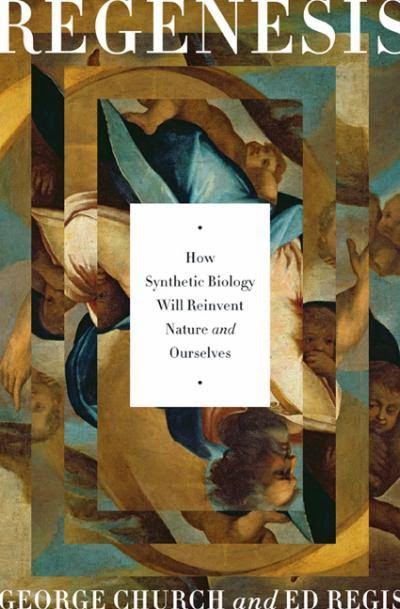 The above paragraph is straight from the Amazon webpage for the book. I had to quote it because I can't write anything better than that. It's an easy to read book so I am pretty sure anyone who has 3-4 hours on a weekend will easily finish reading it. You will not only learn how synthetic biology can change our future but also how important it has become in our lives without even realizing it. Moreover, if you want to be an entrepreneur in biotech there are tens of examples of them; how they were founded, how and why they succeeded (or didn't), the challenges and even future directions.

Before you look up for the definition of synthetic biology, let's see how George Church describes it:

"the science of selectively altering the genes of organisms to make them do things that they wouldn;t do in their original, natural, untouched state."


"Creating a mirror world might give us a fresh lease on life, one free of disease and unwanted agricultural pest species."

"...species that are lowest in diversity are most vulnerable to extinction."

"Give me a selection, and I will change the world."

"Multicellularity tends to come with a hard consequence-you give up your immortality."

"What should we do? Doing nothing, or doing what is traditional or natural, is not even close to a recipe for survival. If we choose tomorrow to behave in a way that our primitive ancestors did, nearly all of our 7 billion humans will die."

Posted by Chemdiary at 3:57 PM No comments:

Alfred Werner's seminal 1910 paper on polynuclear cobalt complexes: What have we learnt since then?

Alfred Werner is one of my heroes in chemistry. He's probably in top 3 with Linus Pauling and Fritz Haber. I wrote posts about him before. Also here are two links about the controversy between him and Jorgensen:

S. M. Jørgensen and His Controversy with A. Werner: A Reconsideration

But, he has some role on almost anything I write about inorganic chemistry since he is the founder of coordination chemistry and probably the most important chemist who showed people the importance and power of inorganic chemistry. What he did in his limited time (he died at the age of 53) and with his limited equipment is simply incredible. He left us hundreds of pages of publications, books and his legend.

Karl Wieghardt is among my scientific heroes and as I said before I hope I can work for him one day. Here is an interview with him that I posted before. So, I am extremely happy to hear him giving a talk about Alfred Werner. I will not spoil it for you, because I really want you to watch/listen to this presentation by him about Alfred Werner. Once again, I hope you will realize and share my thoughts about Alfred Werner. Because, as Werner's life, the presentation is also full of surprises. I am pretty sure you will learn many things about Werner that you haven't heard so far. I hope you enjoy it.

I try to read as many Nobel lectures as possible. You can often find really important pieces in those successful scientists' life and career that might help you figure out a problem in your research or a way to approach the problem.

This Nobel lecture on membrane fusion by J.E. Rothman is among the best. Just like many other Nobel laureates, he also has an interesting and diverse background that helped him throughout his career.

According to him, "the key elements for breakthrough" are:

-The choice of the right problem at the right time

-A unique way of approaching the problem


-the right partner to attack the problem

"there is no process in biology that, at its very core, is not physical-chemical
in nature. As the direct consequence, we can expect that, in due course, all of
life—even human thought and emotion—will be understood as emergent from
physics and we will understand ourselves in health and in disease as complex,
organically composed self-determining machines. This is a perspective that may
frighten some, but it should not because it offers our species the best hope for
the long term."

"How Does a Physicist Approach the World (including the Biological World)?

Here is the lecture slides :

Here is where I read the lecture:

Posted by Chemdiary at 9:12 PM No comments:

I couldn't help reading another article on Fritz Haber today.

Like every persont, he had a personal life and he made choices. All I am interested in him is his science and I admire his science.

Posted by Chemdiary at 9:55 PM No comments:

This is the second article I have read (at least after I started to blog) on Fritz Haber. The first one, in case you are interested is here. This one is a more biographical article written by Fritz Haber's godchild Fritz Stern for the 100th year of Fritz Haber Institute. If you are interested in history of science, I think you should definitely read it.

"In our world so fond of denigration, of alleged honesty honed by political correctness, Haber is often remembered as a vain chauvinist."

"To understand Haber is to understand Germany and to some extent the opposite applies as well. They illuminate each other."

"He was a German patriot committed to an international enterprise, science."

"Haber flourished in Wilhemine Germany; the Kaiser set the tone and Haber played to the tune."

"The defense of scientific research as fundamental to national defense was an argument that Haber was to use throughout his career."

"I regret that we live in an age of denigration, and I want to mention an American instance of blemished greatness now being distorted in a faintly analogous process."

Posted by Chemdiary at 7:45 PM No comments:

This is a minireview about the roles of Cu, Fe, Mn and Zn in plant photosynthesis and finally there is a very short part on artificial leaves with Ni. The role of the transition metals in biology amazes me. They are so important that deficiency or higher concentrations of these metal ions have detrimental effects on the plants' or other living organisms' lives. Sometimes I think that some metal ions have very similar ionic radii and in fact it should not be a huge problem to have one instead of another. But, when you look at the biology you see only one ion instead of the other. How is this regulated? What brings those metal ions and places them in those proteins or organelles? Yes, there are chaperones but what is the source of this incredibly high selectivity and how are they transported? I hope one day we will learn. 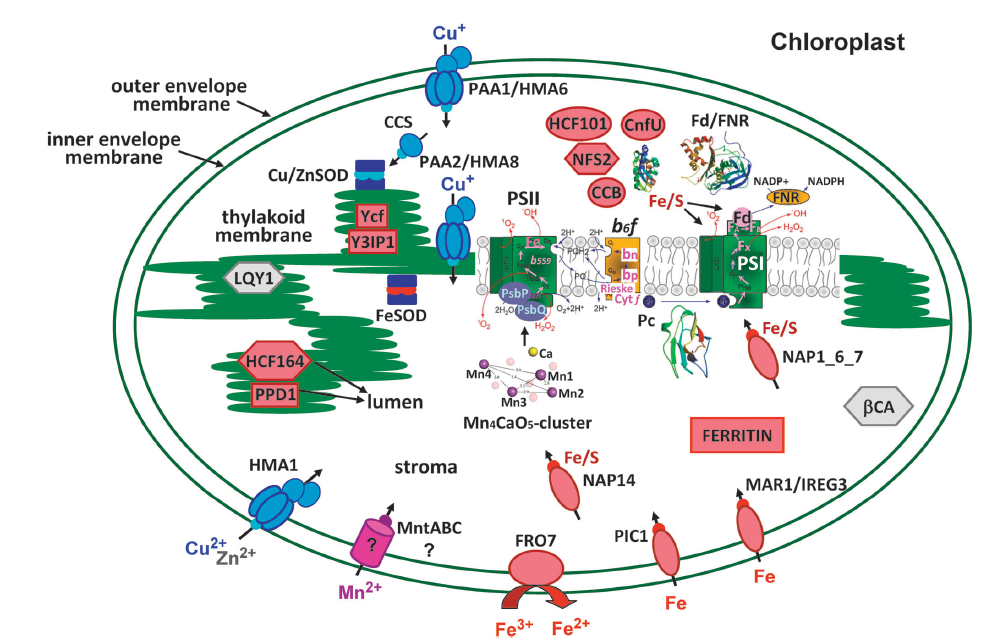 This was the last book I read in 2014 and in fact I finished reading it on the 30th. 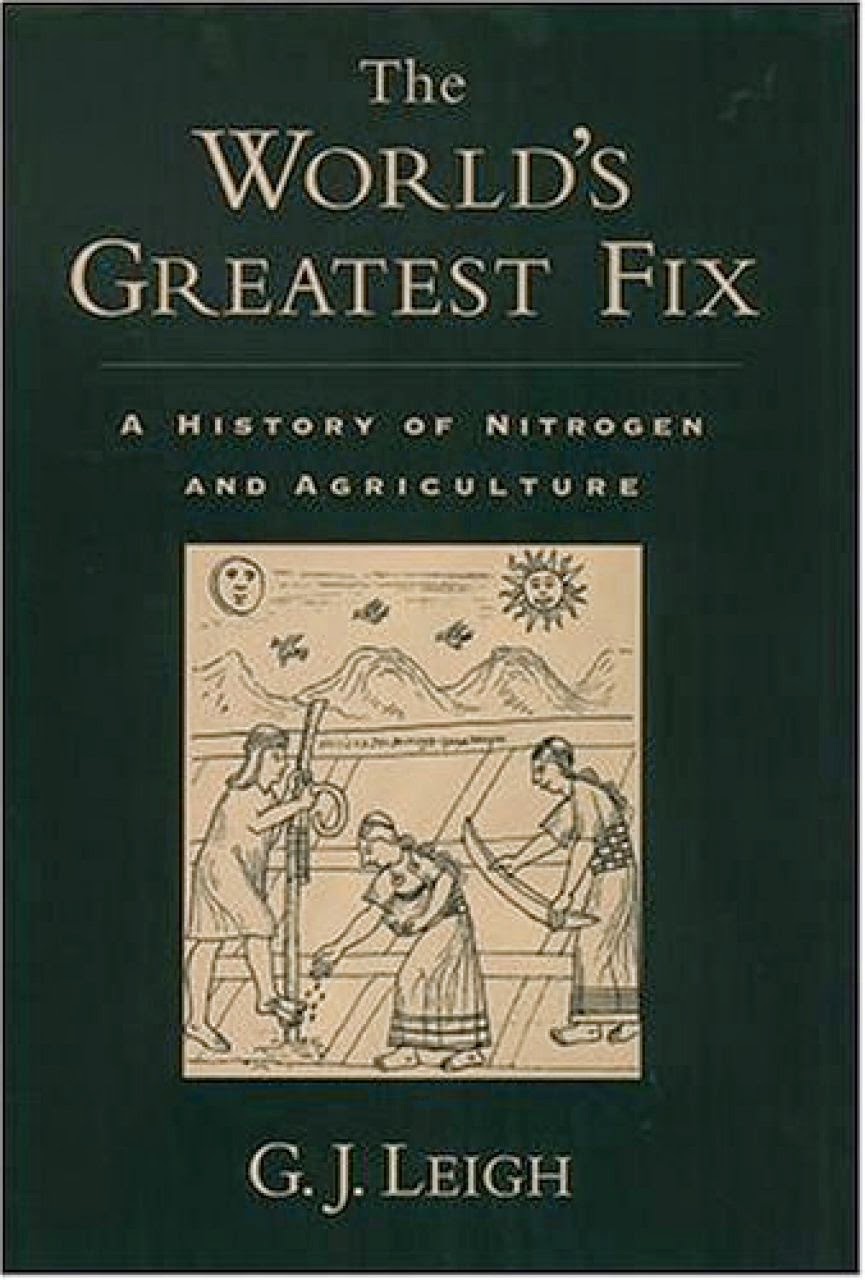 I was surprised that the first half of the book was about the history of fertilizers and agriculture (I should have understood it from the title!). Then comes the second part about the discovery of nitrogen and the historical progress towards Haber-Bosch process. These chapters were full of inorganic an industrial chemistry with several journal articles that I would love to read as soon as possible. I had always thought of Haber's method for nitrogen fixation as a more serendipitous discovery instead of a scientific research. I could not be more wrong. Also, Bosch's coworker Alois Mittasch tested "2500 different catalysts in 6500 runs within about one year." So much of the process (or reactions) were already studied in detail and there were other methods in use for nitrogen fixation. But, Fritz Haber (and Bosch) was the only one who made it work more efficiently and turned it into an industrial process. Final chapter is about nitrate and nitrite for those who are concerned of their affects on health and environment. Again, here you find a lot of peer reviewed journal articles as references. I think this was one of the best science books (chemistry in particular) I have ever read. Here are some quotes from the book:

"Alchemists, no less than modern scientists, were keen to find sponsors."

"No scientist ever makes a fundamental discovery that owes absolutely nothing to his predecessors."

"Today one can no longer whisper the magic words "nitrogen fixation" to granting bodies and expect to be funded."

"...%40 of all people alive today are dependent upon Haber-Bosch nitrogen...."

"There is a need for people to be much more educated scientifically, so they can make their own informed judgements."

"scientists...like the alchemists, so many employed by modern equivalents of rich princes hoping to find the philosopher's stone."

Posted by Chemdiary at 8:09 PM No comments: