People probably won't like what I will say, but why is this a Science paper? For your information, I respect the work here in this paper. I just don't understand what makes it a Science worthy paper. I am someone who uses DFT all the time to the complexes I synthesize. They have hundreds of atoms, and at least two metal atoms (usually in unusual geometries and oxidation states). When one method or basis set doesn't work, you try another one; and it goes on... Anyway, maybe I am just too stupid to understand the science behind this paper.

Cancer is not a new disease. It's been around since life on earth started. I found this Minireview very useful, and it can definitely be used as a source by following the works cited. The authors compiled several early examples of cancer, and they provided us some writings from ancient philosopher/doctors about the disease. The really frustrating part is that for some types of cancer we are not in a much different situation than that of those ancient doctors.

In the end of the article, there is also a nice timeline of cancer with "milestones".

How much chemistry (history) does C&EN know?

Yesterday I saw a link to a chemistry history quiz by C&EN magazine and I decided to take it. The second question asks the first "human made" element and the answer according to C&EN is plutonium which is WRONG. 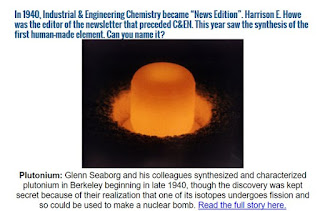 I am not sure if I am missing something, but it's hard to believe that they got this fact wrong. Please correct me if I am wrong.
Posted by Chemdiary at 8:35 PM No comments:

Charles Darwin - not a genius?

A few weeks ago, we had to evacuate the department for some reason. As I was hanging around some old Science magazines, I found the Jan. 9, 2009 issue. It appears that it's a special issue dedicated to Charles Darwin and his famous book. I read several articles in this issue and I'm glad we evacuated the department.

Recently, I saw this ridiculous article "Charles Darwin was no 'heroic genius', say scientists". Thanks to modern day "science journalists", it was hard to find the original research article. Anyway, I was able to find the paper with some digging. I am not planning to read the paper since I have better and more useful things to do. Assuming that they do claim that Charles Darwin was not a genius and he was just someone who followed up a popular idea of his time, I am flat out going to say that I disagree. This brings us to the Science magazine I mentioned above. Please take a few minutes and read why he was special. Thanks to Peter J. Bowler there is an article in this issue with the title "Darwin's Originality". You'll find the answers you need there. I hope Dr. Michael Muthukrishna (the lead author of the claim above) who is I guess a psychologist will find some time to read this article and hopefully change his mind. Here is what he said to Telegraph :

"We can see this process at work when two people have the same apparently innovative idea at the same time – such as Charles Darwin and Alfred Wallace with the theory of natural selection."
Rather than being heroic geniuses, Darwin and Wallace were in the same ‘cultural milieu’, both reading the same books and both travelling to biologically diverse island environments.”

Looks like it's that simple for Dr.Muthukrishna. Ridiculous.
Posted by Chemdiary at 1:55 PM No comments:

This is a minireview where the authors focused on the implementation of metathesis catalysts "in specialty-chemicals and pharmaceutical manufacturing". I think it is a very useful review. In particular, I like the details like the effect of impurity (and what they are). These impurities are not only coming from the previous steps or starting materials but they are also some of the undesired side-products of metathesis. Early metals such as Mo and W tend to cleave and make new bonds. So, as you can imagine there is a lot more going on these reactions.

There is also nice table where you can see a long list of ring closing metathesis (RCM) catalysts and their industrial application. Finally, there are several examples of RCM, the challenges and some nice discussion about their activity and selectivity.