Berzelius and How Is the Laboratory Glassware made ?


Jöns Jacob Berzelius, who is known for the discoveries of silicon, selenium, thorium and cerium, is one of the greatest names in chemistry. But, in fact we owe him a lot more than that. He believed that the alchemical symbols for the elements made chemistry hard to learn and perform. This idea was also adopted by Dalton. Even though Dalton tried to change the symbols of the elements, they were again hard to use in chemistry. Chemistry needed something simpler. Since chemists (and of course alchemists) used different symbols all over the world, it was almost impossible to read each other experiments. This was also one of the reasons why chemistry was not able to be conducted systematically. Understanding this fact and knowing that he was the one to change it, Berzelius decided to develop a nomenclature for the elements. He wrote "The chemical signs ought to be letters for the greater facility of writing, and not to disfigure a printed book. I shall therefore take for the chemical sign the initial letter of the Latin name of each chemical element, If the first two letters be common to two metals I shall use both the initial letter and the first letter they have not in common." By the help of this giant step, chemistry suddenly became more available to public and scientists. The reactions which were written in some kind of esoteric language was now clear and universal. This paved the way for the new chemists.
Berzelius was a great experimenter. He developed fine techniques to measure the atomic weights of the elements and they are remarkably close to the values measured with the state of the art instruments. 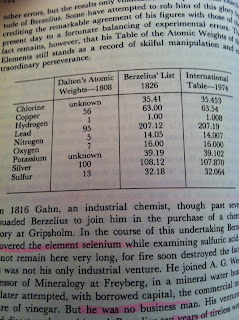 What made him so good at experimentation was his great skill at glassblowing and patience. He designed and made his glassware himself. This helped him to do more precise and accurate experiments. Even Goethe wanted to learn glassblowing from him.
I have always thought that all the glassware we use in the labs are mass production. We went on a field trip to a glassblowing shop and I was so surprised to see that majority of the glassware in the labs are made by glassblowers. The glassblower said that they make almost everything for the labs except beakers, test tubes etc. Obviously, they are now made by big companies. The type of glass used for the labs is called Pyrex-glass. Here is some more information about glassblowing and a comparison of different types of glasses :
http://chemistry.boisestate.edu/people/richardbanks/glassblowing/glassblowing_history.htm

A glassblower is definitely an artist. Although the one we visited makes only scientific glassware, he has all the skill that an artist needs. He also made a very small cute cup with a "smiley" on it. After the glassblowing finished, he showed us how he checks for  leaks on the glass. They use Tesla Coil for it. You can watch how he made a "condenser" for us and then checked it by his Tesla Coil below :

Next time when you use your condenser or the gas line please remember that it was not made in a huge factory. Somebody really blew into glass and did it.